Business Travel Costs Around The World

Business travel is expensive. Last year the average cost of a domestic business trip in the United States was $990, with the average for an international trip coming in at a sizeable $2,525.

But which is the world’s most expensive city to visit on business trip? Surprisingly the answer is Caracas, the capital city of Venezuela. 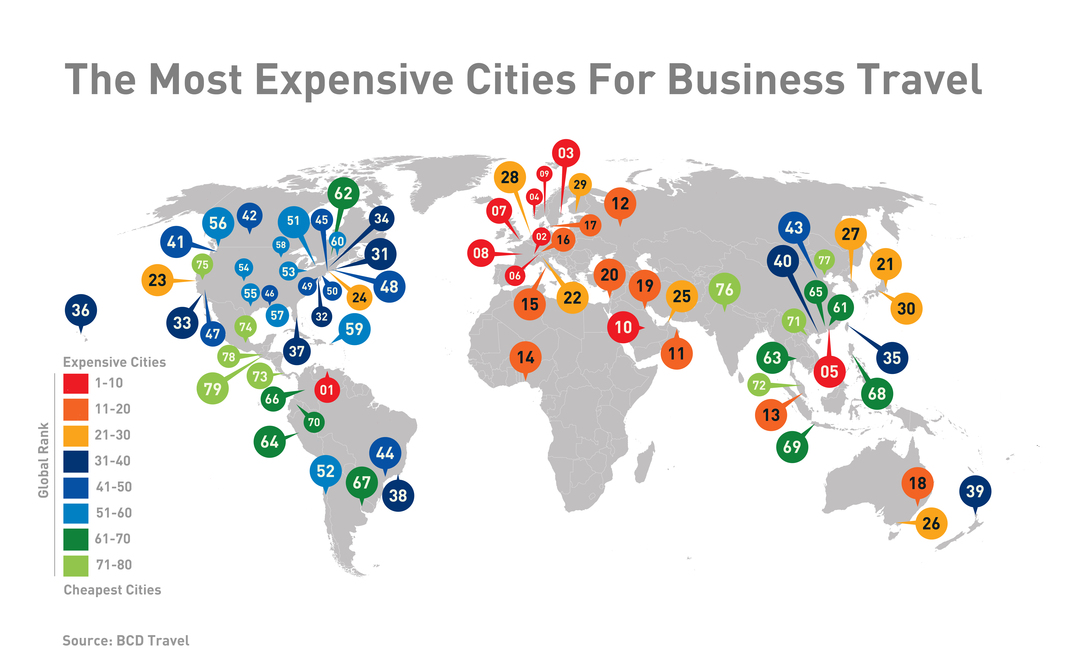 For more detailed information about each city see the bar graphs below: 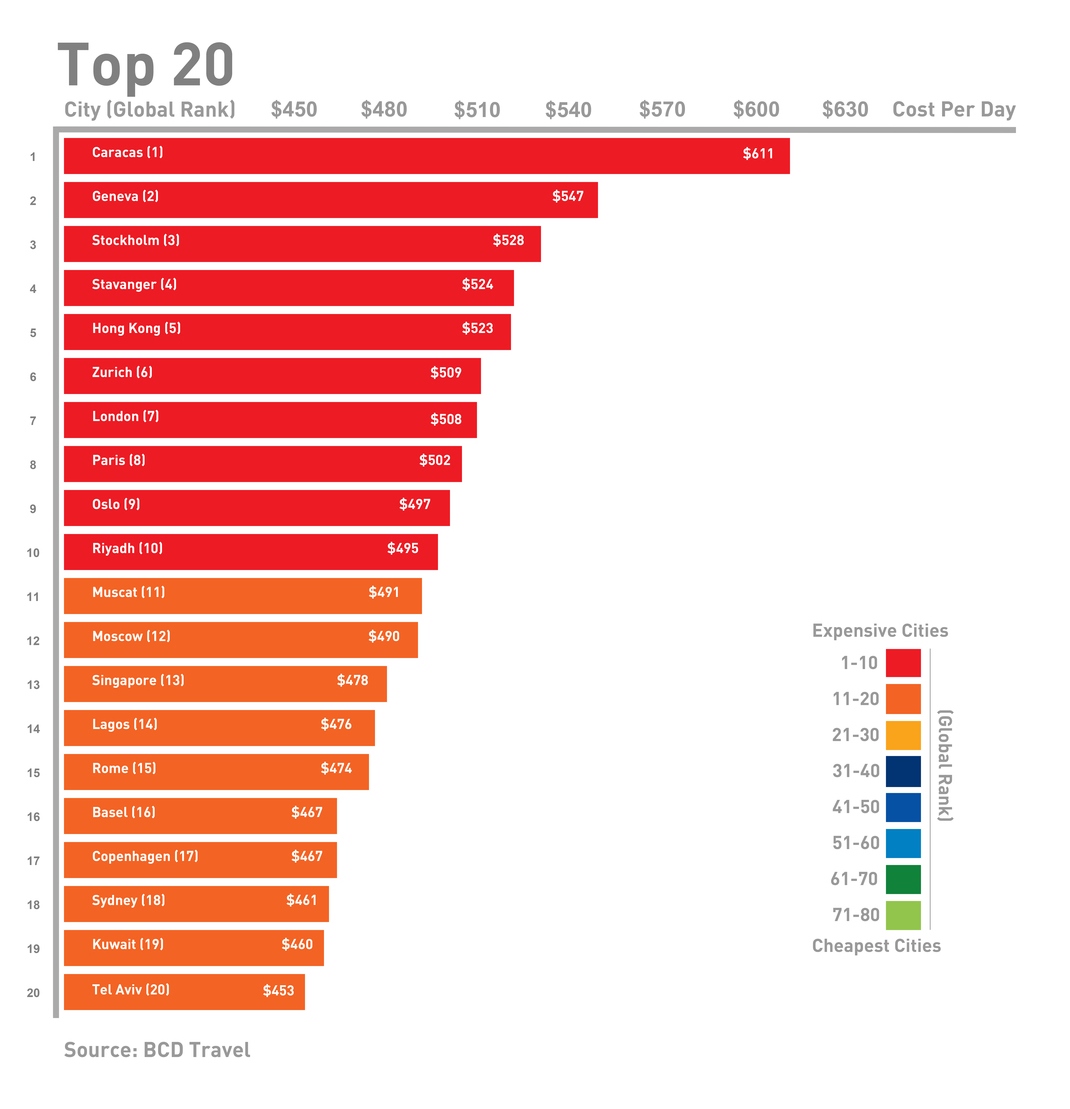 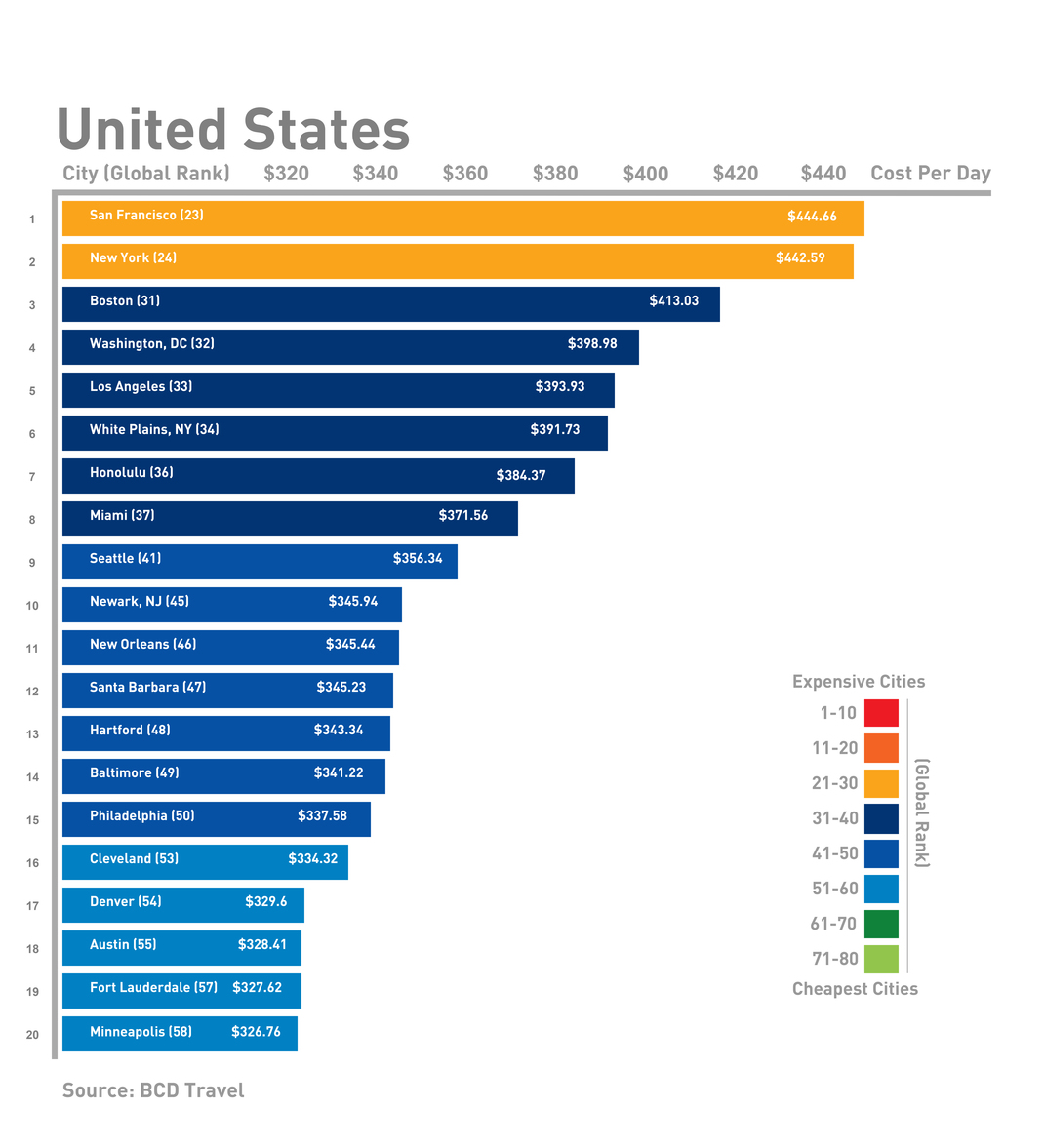 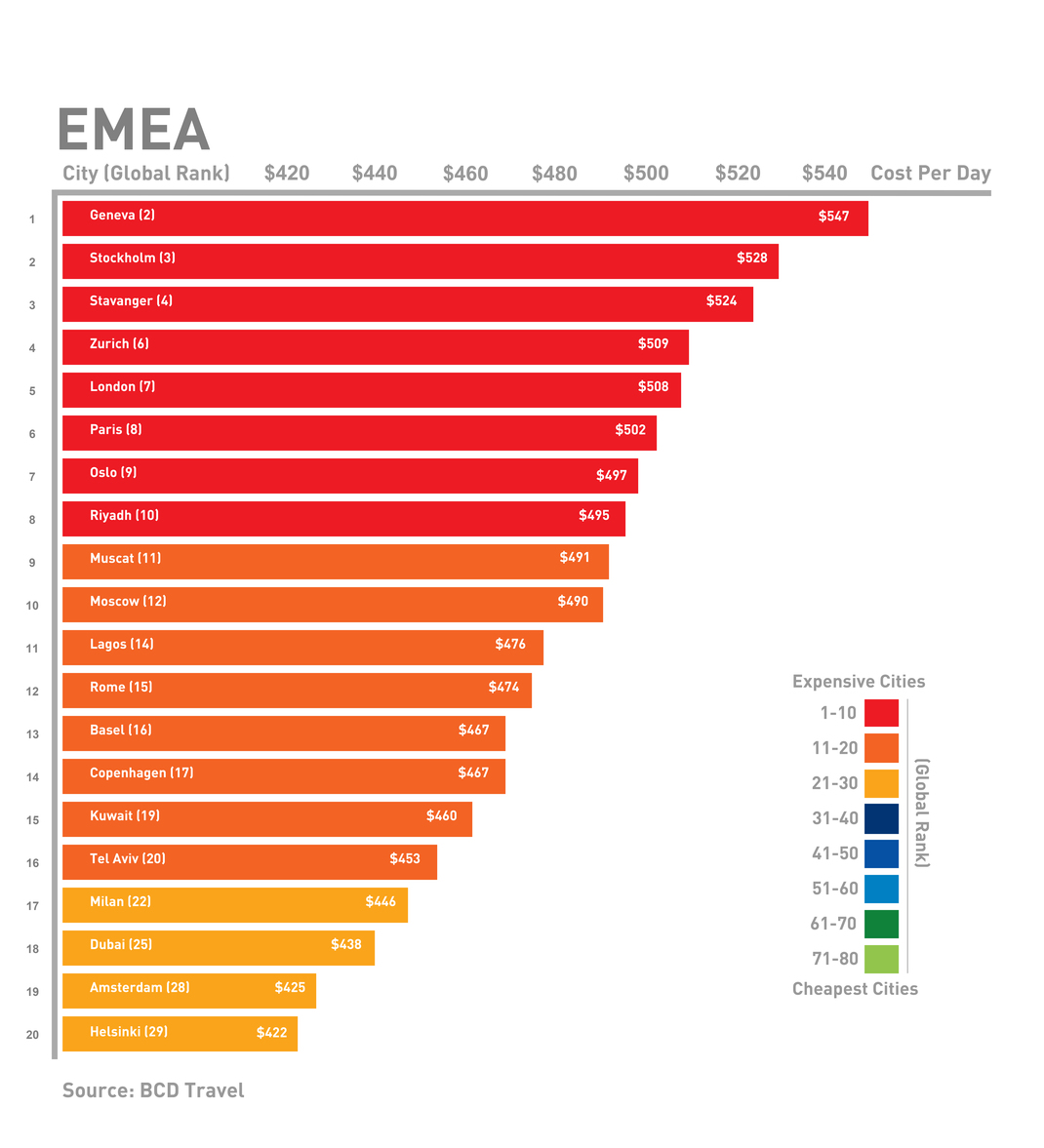 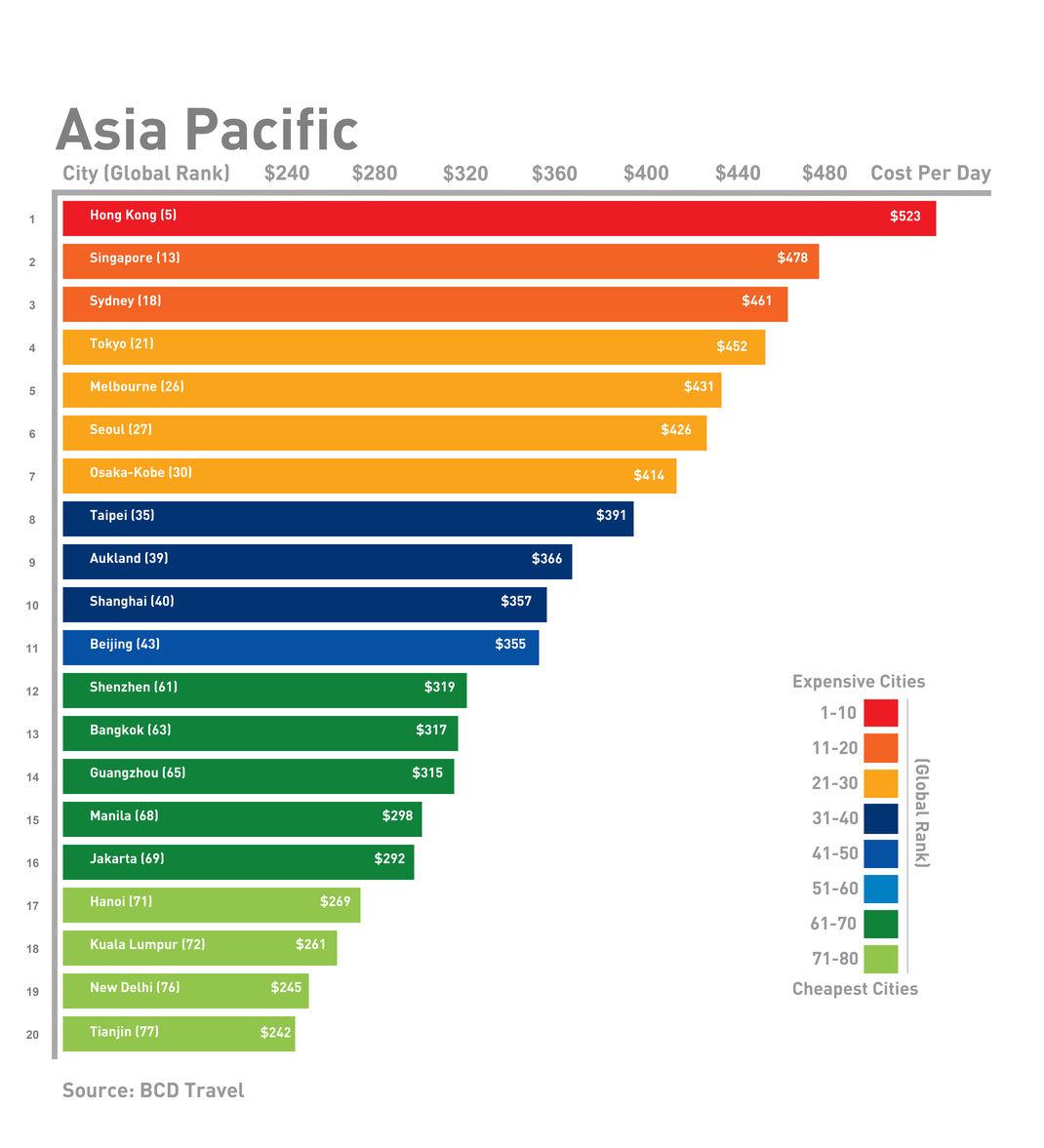 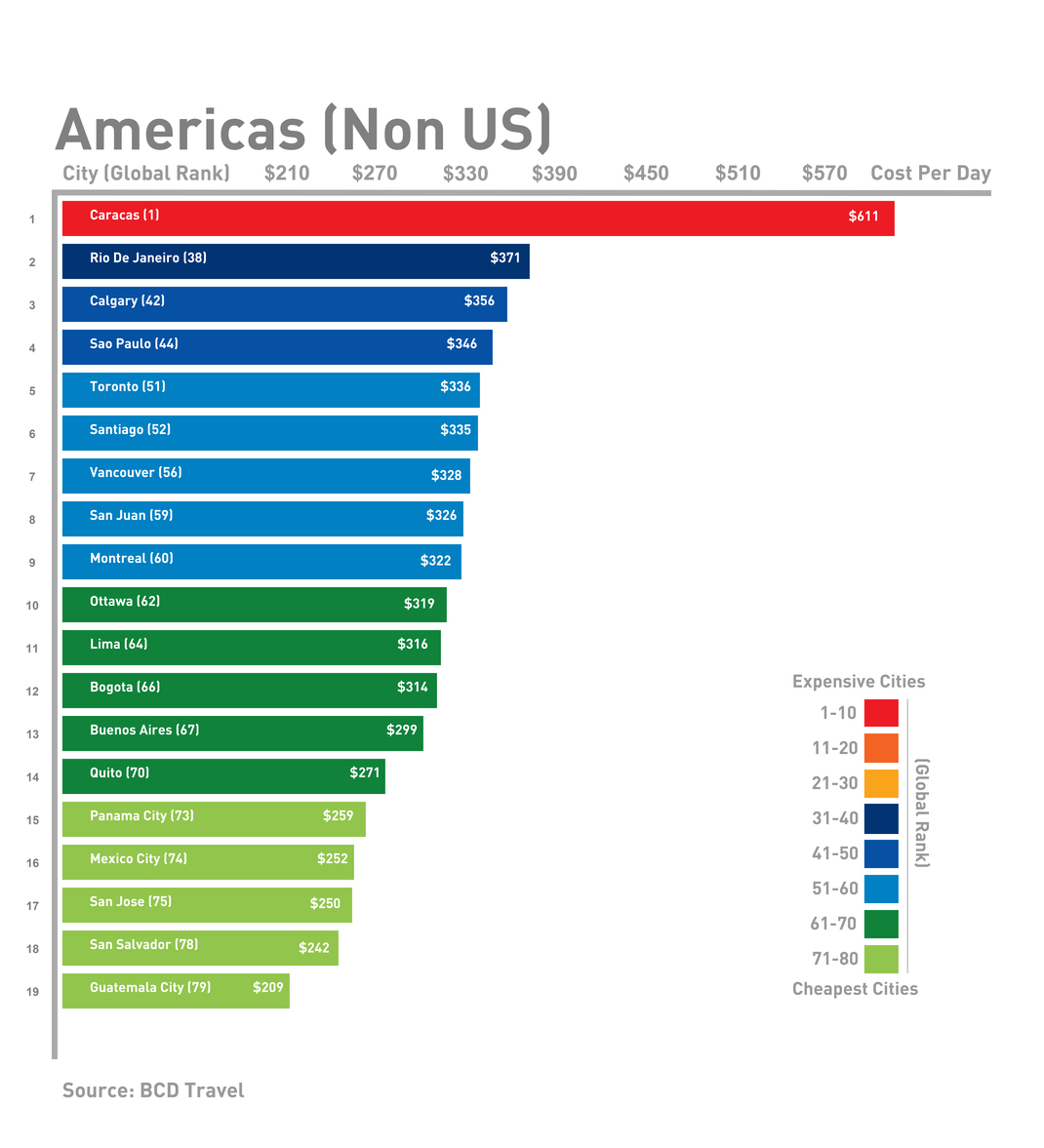 The cost per day figures are calculated using real prices paid by BCD Travel’s corporate clients in 2013. Hotel, car rental and food costs have been taken into account for each city. Food costs are provided by Mercer Inc. and are for 2014.

This differs from traditional cost of travel data as it uses a database of only corporate clients. For example while there is plenty of cheap accommodation and food in cities like Hong Kong (ranked 5th) and Singapore (ranked 13th), business travelers usually look for a higher level of base quality than tourists.

It is cities where the mid-range to luxury travel options are more expensive that rank towards the top in this study.

Why is Caracas the most expensive city?

It’s certainly a surprise to see Venezuela’s capital city, Caracas, ranked as the most expensive city for business travelers in the whole world. With an average cost of $611 per day it is significantly more expensive than Geneva ($547) the second most expensive city.

But when you dig a little deeper it’s not as surprising as you would initially think. The Venezuelan government’s strict price and exchange controls have seen costs in Caracas rise quickly, and the city has been included in the top 10 in many recent cost of living studies. For example, a survey released last year by ECA international listed Caracas as the most expensive city in the world for expats.

The price of food in Caracas is incredibly high. There is a thriving black market but the restaurants and supermarkets that business travelers have access to are among the most expensive in the world.

Venezuela is also one of the most dangerous countries in the world. Safety comes at a premium price. Businesses are unlikely to book staff into cheap accommodation in a city that has seen more murders than Baghdad each year since 2011.

There are a number of cheaper hotels in Caracas, but international visitors are strongly advised to stay away from them. Business travelers are extremely unlikely to check into these hotels, and for anything that even comes close to typical international standards they will have to spend a small fortune.

Data from Numbeo shows just how much higher typical business expenses are in Caracas than in San Francisco, (the US’s most expensive city with a cost per day of $445).

The cheaper end of the scale 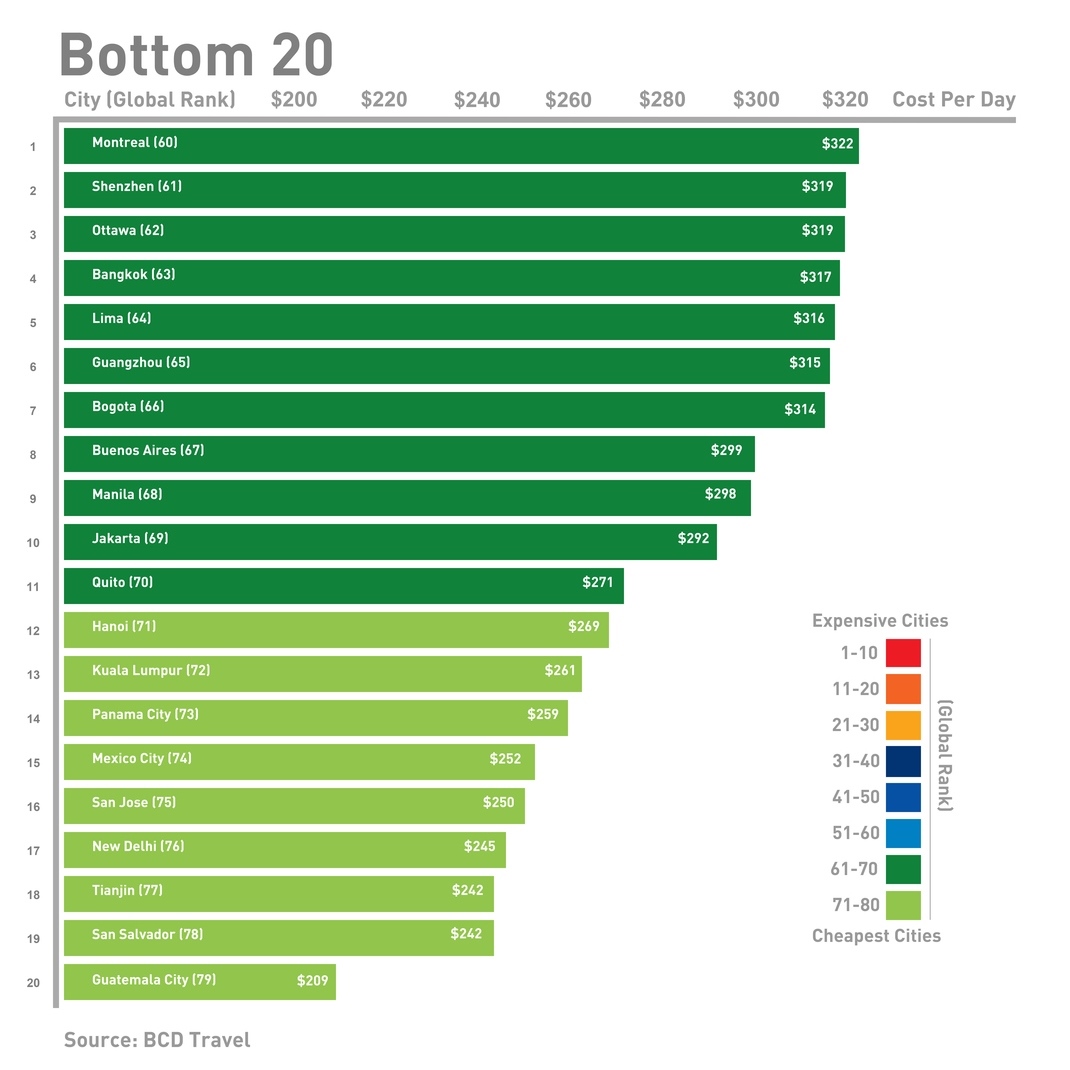 The United States vs. Europe

Another clear observation that can be made from the map or by comaring the graphs is just how much more expensive Europe (and Asia) is for business travelers than the United States. The US has no cities in the top 20, and only New York and San Francisco make the top 30.

US cities are generally cheaper than major European and Asian cities in most cost of living or cost of travel studies, but it’s interesting to see this trend carries over into the world of business travel too.

Focus on the United States 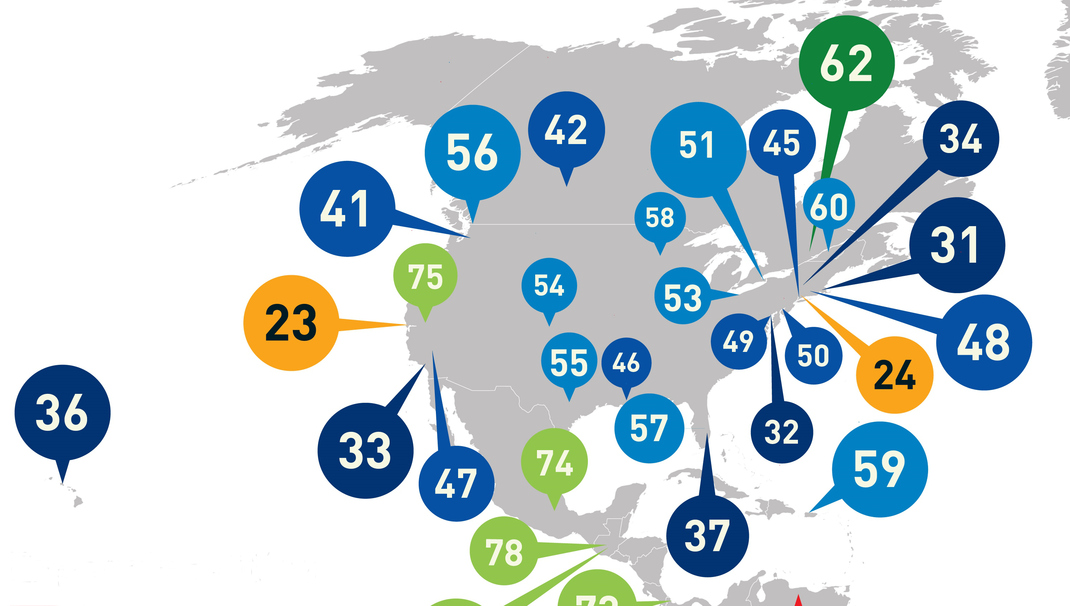 The United States may not be home to any of the top 20 most expensive cites, but it does spend more on business travel than any other country in the world. In 2013 business travel spending reached $274 billion in the US, with only China getting anywhere near this with a figure of $225 billion.

No other country was over the $200 billion mark. US Business travel spending was projected to top $310 billion in 2015, which is a staggeringly high figure.

So business travel is booming in the United States, and for most businesses the lower cost of trips is a good thing. At Expert Market for example the US team definitely takes more business trips (largely internal) than teams working in European markets. There are a number of reasons for this, but the lower cost per day of these trips is a major factor.