Most POS companies offer a single POS product that a restaurant has to hope covers all the bases. Aldelo takes a different approach, offering three products with distinct strengths and feature sets. The Aldelo solutions – Aldelo Express, Aldelo POS, or XERA POS – are highly customizable, so it’s more than likely that one will be a great fit for your establishment.

What’s On This Page?

Each Aldelo POS solution is designed with different hospitality enterprises in mind.

As a tablet-based POS, Aldelo Express is the most compact and mobile of the three solutions. It’s also the most agile, offering full service functionality in a portable package. It can be run with just a printer, a till and an iPad, making it the ideal choice for smaller outlets like delis and coffee shops. It’s light, but not lightweight.

Aldelo POS is a traditional desktop solution that’s flexible enough to earn its keep in many settings. It boasts features that Aldelo Express doesn't (see below), but lacks some of the analytics offerings of XERA. Overall, it’s best suited to medium-sized establishments that need restaurant service and management functions.

XERA POS is the best fit for high-volume restaurants, or those operating multiple locations. The system balances traditional POS functions with advanced analytics. It’s often used in tandem with either Aldelo POS or Aldelo Express to afford users an even larger roster of features.

The first thing that most Aldelo POS reviews mention is how easy it is to get up and running with any of the Aldelo solutions. They all utilize the same sleek touch screen interface, though the time it takes to begin serving customers with each varies. Aldelo Express simply requires you to have an iPad and download the free Aldelo app, whereas the bulkier Aldelo POS and XERA POS take longer to install. Depending on the number of terminals and modules you want to integrate, it may be best to seek guidance from Aldelo’s support team.

Thankfully, Aldelo addresses the bulk of common customer queries in a series of YouTube training videos. These cover everything from how to connect receipt printers to the steps for splitting a check.

Check out the video below for a walkthrough of the Aldelo user interface:

Core features of Aldelo systems include:

We’ve also highlighted one special feature for each system.

Aldelo Express lets you set security levels to restrict performance of certain functions to authorized employees. This reduces risk for your restaurant, allowing you to train new staff on the system without costly mistakes.

With Aldelo POS, you can break each menu item down into its component ingredients and obtain detailed costings at the click of a few buttons. Handy for keeping an eye on stock levels and the profit margins on each item you sell. You can also adjust recipes on the fly when key ingredients start to run low.

XERA acts as a customer call management system when integrated with your phones. It's handy to view a customer’s order history (stored on the system) or place them on hold while you serve another customer.

Eligible for Point of Sale System Quotes?Click your state below to find out

Aldelo offers fewer third-party integrations than some suppliers. For most, that won't be a deal breaker, but it may deter loyal users of other software packages. This means that you won’t find support for Grubhub, BeerBoard, OpenTable or Xero. Aldelo does support QuickBooks, but not without paying for an additional piece of bridging software called Aldelo Accounting Integrator. With three Aldelo POS reviews in one, we conclude that they all lack the simple cross-platform compatibility of many competitors.

Manuals, support documentation, and select third-party software is all available for download online. Rather than developing software in-house, Aldelo acquires software from third-party vendors like Epson, Toshiba, Pioneer POS, HP. Full customer support on Aldelo software is available 24/7 via chat or email, with additional support available by phone on a reasonable schedule.

What Aldelo Customers are Saying

Customers appreciate Aldelo solutions for their ease of use, which, in turn, simplifies employee training. One through-line in most customers’ Aldelo POS reviews, however, comes down to money. The ability to streamline FOH performance means more turned tables. The ability to implement gift card and customer loyalty programs cultivates repeat business. And the powerful analytics from XERA give a granular view of nearly every aspect of performance, showing you areas of opportunity that might not otherwise be apparent. Each of these things can help your restaurant's bottom line, and it’s also possible to mix and match solutions. For example, using XERA for its advanced analytics alongside either of the other two products is common.

Aldelo doesn't list product prices on its website because each restaurant’s needs are different. A small takeout joint needs to be equipped differently than a full-service restaurant or chain of eateries. For this reason, each solution is tailored and priced according to the project at hand. Expect to pay up-front for hardware and monthly for the software. The number of POS stations and add-ons you need will factor into the overall system price.

Expert Verdict: Which Aldelo POS System is Right for your Business?

This is normally the point in a review where we’d deliver a final verdict about a company’s product. Would we, on the whole, recommend the Aldelo Express, POS and Xera? Yes, but there are also more fully-featured solutions on the market that might suit your needs better. Plentiful online training videos and stellar customer service with Aldelo make for a smooth user experience, but the lack of third party support does restrict these POS systems' functionality.

The sheer variety of hospitality POS options can easily overwhelm the uninitiated. After reading Aldelo POS reviews, you may have an idea of the direction you’ll need to take to properly outfit your restaurant. On the other hand, you may also still have questions. In either case, you can make an informed decision in a matter of minutes by comparing restaurant POS system quotes.

Breadcrumb shines all round, but if a strictly iPad-based system isn’t what you’re after (it’s not for everyone, for a number of reasons), Aldelo offers alternatives. 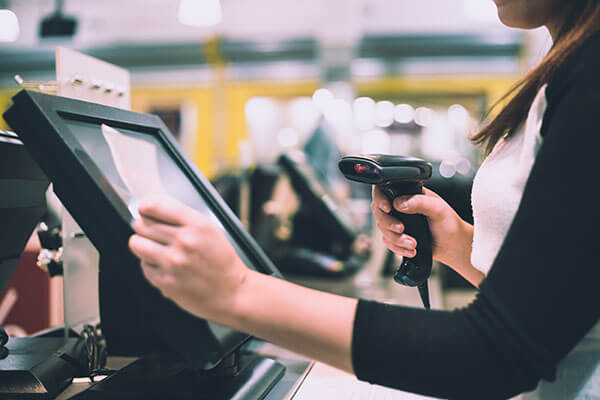 Compare the Different Types of Cash Register
We use cookies. By browsing our site you agree to our use of cookies.