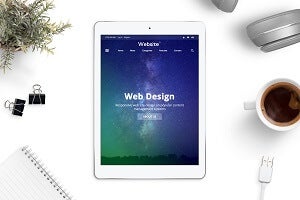 If you’re trying to budget a design project, you may be wondering how much a freelance designer will charge your business. Read on to find out how to estimate the job — and get a better price for your business in the bargain.

The cost to hire a web designer isn’t determined simply by the scope of your project. Among the other factors that come into play are your location, your industry, and your freelancer’s degree of experience.

It’s further complicated by the fact that freelancers’ pricing can seem opaque, making it hard to understand what you’re getting, and whether your price quote is realistic or fair.

In spite of all this, freelancers have a number of advantages.

6 Advantages of Working with a Freelancer

When you’re working with an agency, you may have multiple points of contact. Even when there’s a single point of contact (like a project manager or account manager), there can still be accountability issues, since that point of contact may have a half dozen or more other people reporting to her.

Work with a freelancer and you’ll usually have one person handling all of your project’s moving parts. That means not only a personal touch, but also clearer communication.

Especially at the SMB level, you may neither need nor want to have a full-time designer or developer on staff. Once the project is completed, it’s easy to go your separate ways.

Trying to get an agency to turn on a dime can feel like doing a K-turn in an oil tanker. It’s slow and ponderous. Because freelancers usually take on clients from a wide variety of clients with an equally-diverse set of needs, freelance web designers bring a broader skill set and more of a creative mindset to your project.

Agencies try to group everyone they think they’ll need for a project under one roof, but might come up short if the time comes when your project calls for them to reach outside their cocoon. Because freelancers tend to keep a diverse network, they can usually tap that network if the time comes to implement something that falls outside their usual skill set.

Whether it’s keeping lines of communication open during a project or taking care of your questions after a project is completed, the one-on-one relationship built with a freelancer leaves them invested in your success. What’s more, they’ll be looking to earn more business from your next project, or from referrals.

Now that you know the advantages of a freelance designer, you’re likely wondering what factors into their rates and what you’ll pay for your project.

The Type of Project

If you’re simply installing some new apps, or designing a small site with minimal special functions, you’ll pay much less than if you were migrating your existing site lock, stock, and barrel to a new platform, undertaking a massive redesign, or looking for bespoke programming. Know your needs first!

Someone who customizes templates and does a bit of CSS and HTML for a living isn’t going to command the same premiums as someone who also knows Drupal, Joomla, Magento, SEO, and app development.

Your Location (and Theirs)

If you or your designer are located in an area like the five boroughs or Silicon Valley, where the cost of living is astronomical, you can expect to pay more. If you’re hiring from an area with a lower cost of living, you can often get the same skill set at a lower rate.

Your Level of Preparedness

This may actually be the most important thing of all. Know what you need, not only in terms of design and functionality, but also with regard to content. If you need a copywriter, a photographer, a database programmer, or an app developer, bring those needs to the table. Few things will cause more frustration — for all involved — than a feeling that a project’s scope, time, or cost is going off the rails for lack of preparedness.

Getting your ducks in a row early in the process ensures a fair rate and fewer headaches for everyone.

For the most part, an independent freelancer doesn’t have the same kinds of overhead and expenses as an agency. That helps them to keep their rates lower than their larger competitors.

Freelancers love hourly rates. Their clients? Not so much. That’s because it’s easy for hours to add up quickly, especially if changes, edits, or extras that weren’t part of the original brief are involved.

A day rate can be feasible if you’re providing a space for your designer to work on-site. This can have drawbacks, since it limits the pool of designers from which you can draw, can disrupt your office routine, and may pose certain security or IT issues.

This is the most cost-effective way to pay for your project, with two major caveats: one, you must be prepared ahead of time with the full project specs; two, procedures must be put in writing to address work that goes beyond the scope of the original project.

Project-based pricing seems more expensive, but often ends up more cost-effective. After all, there’s no question as to what your web design will cost, and therefore no surprises later.

A page-based rate is more common among writers and content creators than it is for designers. For smaller projects that aren’t code-intensive, however, paying a set rate per page may be an option.

Freelancers love retainers. This isn’t a common arrangement for a one-off design project. However, if you’re looking at the longer term — you know your site will require frequent maintenance and updates, or if you have an aspect of your site, like a blog or ecommerce presence, that needs to be kept fresh — arranging a retainer agreement can be more sensible for everyone involved.

How Much Should You Pay?

Hourly rates can be as low as ten dollars an hour for an overseas designer. For someone local and highly experienced, $50 per hour is common, but prices can go much higher — $100 or more per hour.

Project rates can be as low as a few hundred dollars for a WordPress-backed template-based site to several thousand dollars for an ecommerce site or one that requires complex programming.

That may seem terribly vague, but as you’ve no doubt gathered by now, that’s because there are so many variables playing into any web design project. Therefore, we suggest doing your research — starting with the short form at the top of this page — to get a range of custom quotes from qualified designers.

What Are The Top Blog Platforms? 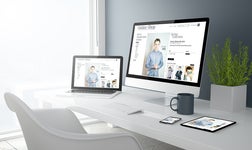 Volusion Review: The Right Solution for Your Business?