We’re a dedicated team of in-house editors, writers and researchers who are passionate about helping businesses find the answers they need.
On this page
Expand
Compare free phone system prices and save Get free quotes 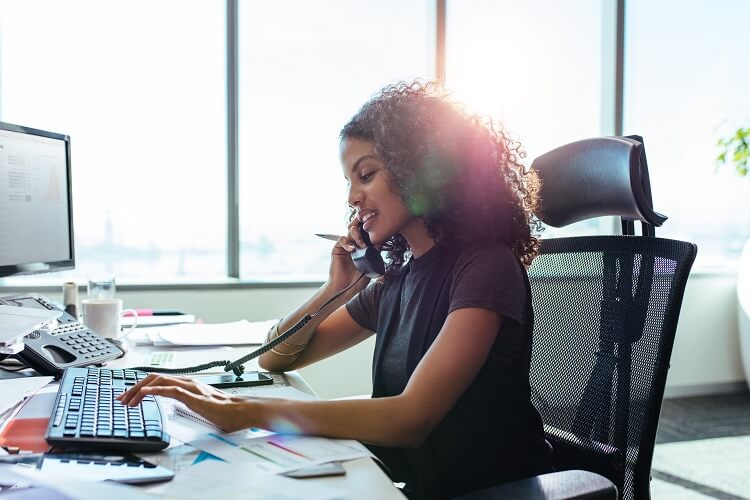 The world of business telephony is filled with jargon – and PBX is an acronym you’ll come across quite a lot during your research. But what is PBX, what are the different kinds of PBX, what are its benefits, and how much does it cost? Read on, and we’ll answer these questions and more.

What Is PBX, and What Is It Used For?

A PBX is a private branch exchange. In other words, it’s a business’s internal phone network. PBX systems were originally created to make it possible for employees to call each other internally, for free, via extension numbers – without having to use (or pay for) the public landline network.

PBX systems also route and switch company calls, both external and internal. Think of a PBX as an automated, non-human switchboard operator. Due to the nature of these key benefits, PBX systems are best suited to businesses with lots of different people using different phones.

The million-dollar question, of course, is this: is it actually necessary for your business to invest in a PBX system? The answer depends on how you want to run things. If you want your team to use the PSTN (public switched telephone network, or even more simply, the landline) to make phone calls, then yes, you would certainly benefit from a traditional PBX system.

But if you’d like your team to utilise modern VoIP technology and make phone calls over the internet – which we’d strongly recommend instead – then a full-blown PBX system isn’t strictly necessary. That’s because many VoIP phone systems now offer all the same capabilities as a PBX, meaning you don’t have to search specifically for a PBX system any more. Of course, there is IP PBX, which is a kind of VoIP system.

A little confused? Don’t worry. In the next section, we’ll explain these different types of PBX in more detail.

What Are the Different Kinds of PBX?

At the very start of your research into PBX systems, you should ask yourself one key question: do I want traditional PBX, or IP PBX? The difference between these two kinds of PBX is in the types of calls that each system works with. Let’s compare:

Should I Invest in Traditional PBX or IP PBX?

If you’re starting from scratch, IP PBX is the way to go. VoIP-powered systems are the future (and the present), while landline systems are steadily declining in popularity and usefulness. Plus, setting up a traditional PBX system from scratch can prove very expensive thanks to all the hardware and expertise you’ll need to pay for (more on that later).

On the other hand, if you already have the copper wiring and hardware in place for a traditional landline PBX system, it could well be worth making use of that and setting one up. But we would definitely recommend choosing a hybrid system that can also deal with VoIP calls. That’s right, they do exist – and who doesn’t like having the best of both worlds?

Compare phone system prices and save
Do you already have a business phone system?
Yes No
Just answer a few questions – it only takes a minute

What’s the Difference Between PBX and VoIP?

The answer to this question depends on whether we’re talking about traditional PBX or IP PBX.

Fully traditional PBX systems have nothing to do with VoIP technology. The fact that they make and accept calls via the landline network, not over the internet (à la VoIP), results in a few differences:

So, onto IP PBX. As we know, VoIP technology is the means by which phone calls can be made and accepted over the internet. By that definition, we can simply think of an IP PBX system as a kind of VoIP system.

If you want your phone system to be powered by VoIP tech, note that many VoIP systems now offer IP PBX capabilities without actually describing themselves as PBX systems. That’s why it can help to avoid getting too bogged down in the jargon. Just make sure the VoIP system you’re planning to invest in can do everything your business needs it to do – whether it describes itself as PBX or not – and you won’t go too far wrong.

What Are the Benefits of PBX?

This applies to both traditional PBX and IP PBX. Traditional PBX is cheaper than a standard phone system for the following reasons:

An IP PBX system will save you even more dollars and cents. That’s because:

Imagine a standard phone system, in which each phone needs its own direct line. Now imagine a growing business, with multiple phones and phone numbers. Quickly, the need to install new lines and share new numbers with clients and the public becomes unmanageable.

A PBX system does away with all that. As we’ve mentioned, PBX systems don’t require an individual line for each phone. They also make it possible for a number of different phones (all of them, if you want) to be linked with one number, meaning your customers won’t need to make sense of a directory of different names and numbers just to contact the business.

Speaking of customers, PBX systems come with a variety of features that make calling your business a slick, pain-free experience. Let’s take a look at some key examples:

All of this not only makes contacting you easier, but gives the caller the impression that they’re dealing with a professional business, boosting the credibility and public perception of your organisation.

With a standard phone system, you wouldn’t know how many calls your team had been fielding until your bill came in. By contrast, a PBX system can produce reports on the phone calls it has facilitated, showing which extensions are receiving the most calls, how long calls to certain extensions typically take, and who’s using the system to make personal calls. This can help you to allocate phones more effectively, and stop the misuse of company equipment.

Compare phone system prices and save
Do you already have a business phone system?
Yes No
Just answer a few questions – it only takes a minute

How Much Does a PBX Phone System Cost?

How much your IP PBX system costs will depend on whether it’s a hosted solution (your provider hosts it for you) or an on-premise system (you host it yourself).

With hosted IP PBX, you’ll find your setup costs are very small (unless you choose to buy loads of high-spec IP phones for your team). Instead, you’ll pay for the system on an ongoing monthly basis. The size of this fee will depend on the provider you’ve chosen, and how advanced your feature set is.

With that in mind, let’s take a look at the numbers typically involved:

These days, the most affordable way to install an on-premise IP PBX system is to go for an open source PBX software solution. Such software is usually free to download, and will turn the computer it’s installed on into an on-premise PBX server, hosting all the necessary software and acting as a central control hub.

If a free PBX system sounds too good to be true, well, that’s because it is. These systems aren’t designed to be set up, configured, and maintained by a layman or laywoman, and so you will need to pay someone with the right technical experience to do those things for you. In many cases, you’ll also need to pay extra fees to install the more sophisticated communications features offered by the software provider. Even so, open source PBX is usually still cheaper than the alternative.

And what is that alternative? Building your own IP PBX system, with a server, gateways, and an ethernet switch, all of which can add up to hundreds of dollars. There’s also still the software to pay for, along with installation and setup (which can cost around $1,000) plus ongoing maintenance.

Considering traditional analog PBX? It’s worth knowing that the initial setup costs are going to be high. Let’s take a look at the different components you’ll need to pay for, and how much they’re likely to cost:

We won’t hold back: in terms of functionality, affordability, and simplicity, IP PBX is the way forward. We’d recommend IP PBX every time, unless your office has already got all the infrastructure for traditional PBX in place. Even then, we’d suggest upgrading to a hybrid system that can also make and take VoIP phone calls.

Of course, whether or not you need a full-blown PBX system is up to you. The easiest option may be to seek out a VoIP system (whether hosted or on-premise), and make sure it provides all the features you need – including extension numbers, automatic call routing, and the other great PBX features we’ve discussed.

If you’d like help with finding the right phone system for your business, you should try our free quote-matching tool. It’ll ask a few questions about your communications needs, and then match you up with trusted phone system providers that can supply what you need. They’ll then be in touch with free, no-obligation quotes that are tailored to you. Our service is completely free, and the fastest and easiest way to compare your options.