What Time Does America Start Work?

Expert Market US
More from this author
Have you ever wondered how much America cities differ when it comes to work start times? The answer is quite a lot. In fact there’s an hour and a half difference in the median arrival time between the earliest and latest risers. Nate Silver from fivethirtyeight.com has used data collected by the US Census Bureau, via the American Community Survey, to find out the median time Americans start their working day in each metropolitan area.

The 20 metropolitan areas with earliest arrival times are shown on the chart below: 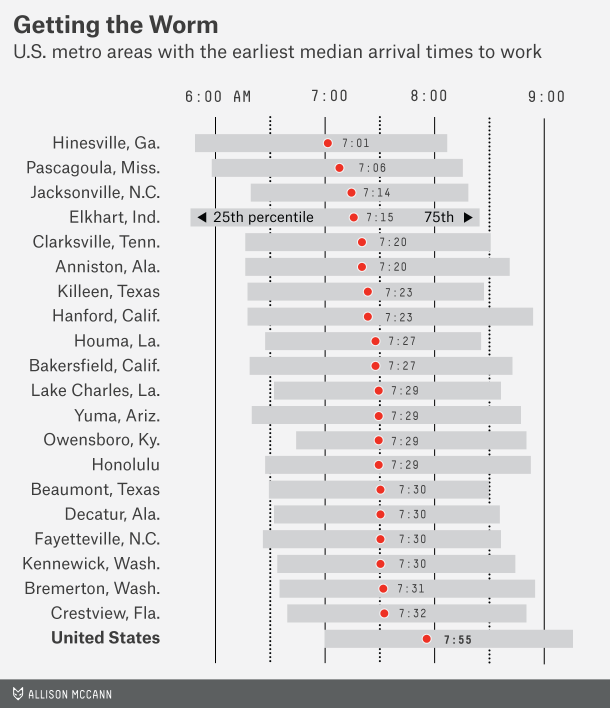 Click image to enlarge
Hinesville, Georgia is the city where the median employee arrives at their place of work the earlier. By 7.01am half of Hineville’s workforce have started their day There’s a strong military presence in Hinesville (the home of Fort Stewart) which will account for a large number of the earliest starters. In fact many of the early starting metropolitan areas have large number of people employed in the military.

This next chart shows the 20 metropolitan areas with the latest median arrival times: 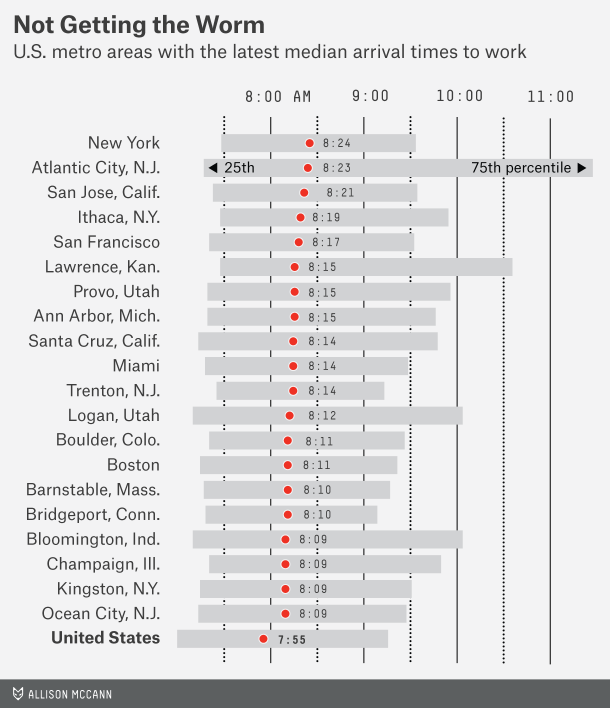 Click image to enlarge
New York City is the king of the lie in. The average worker doesn't start work until 8.24am here. Silver notes that the cities with the latest median start times can be broken down into three broad categories: 1) Cities with a large number of creative young professionals (e.g. New York, Boston, San Francisco.) 2) College towns (e.g. Ithaca- Cornell University, Logan – Utah State University, Lawrence – The University of Kansas.) 3) Cities whose economies are associated with tourism, recreational activities and gambling (e.g. Orlando, Miami, Atlantic City.)Is your home town one of the 20 earliest risers or latest starters? Are there any cities you expected to see that did not make the cut?Image Source: 1
More from Business
Latest from Focus
We use cookies. By browsing our site you agree to our use of cookies.