In big brand battles, no rivalry is as famous as that of Coke and Pepsi. In this competition, Pepsi had famously stayed on the losing side. With market shares down, the company in risk of splitting in two, and profits dwindling at a speed that would have soon seen the soda giant bow out of the public eye, the company needed a change – a big one.

Enter Indra Nooyi, the new CEO of PepsiCo who took the helm just long enough to spawn an idea so crazy that it was perfect. She was going to take soda out of the Pepsi limelight. Even crazier – it’s made the company more successful than it’s been in years, and it’s all thanks to one entrepreneur’s skill for seeing details others miss. 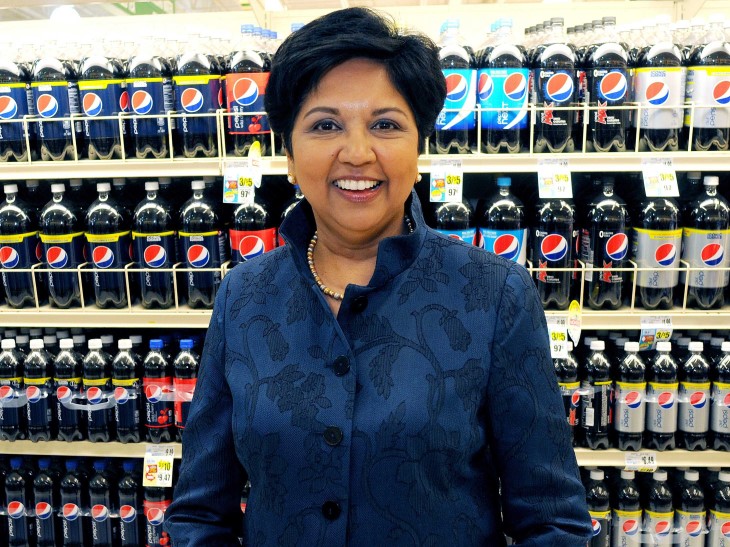 Born in India, Nooyi spent her early years living the college dream. When she wasn’t playing cricket in college or hitting the books, she was jamming out with her friends as the lead guitar in an all-female band, playing as well as singing at events throughout her hometown of Madras. Her dedication to learning and improving herself led her to earning a bachelor’s in Physics, Mathematics, and Chemistry, and a Post Graduate Diploma in Management from the Indian Institute of Management Calcutta.

Nooyi had a built-in interest for how things worked and how to make them work better. This applied both to herself and to her view on the world, so she turned her tech-savvy mind to business and provided a perspective that came from her science education; looking at the big picture, weeding her way down to the cells and decimals, and then looking at the big picture again.

Her first high-profile job was as a product manager at Johnson & Johnson, and that kind of success would have been enough for anyone. But Nooyi had too much ambition for that. Despite family and friends alike telling her she was crazy, she pulled roots and came to the USA in 1978 to earn a Master of Public and Private Management at Yale.

Moving from product manager to dorm receptionist was a sharp change of career. But Nooyi took her jobs personally and tackled them with passion, earning her a position first as a director at Boston Consulting Group, and then Vice President and Director of Corporate Strategy and Planning at Motorola.

In 1994, Nooyi became the chief strategist of PepsiCo, which signaled the beginning of the company’s biggest change. First things first, she went to cleaning house – in ways that would make anyone take a second look. Pepsico dumped Taco Bell, KFC, and Pizza Hut, and spent over $17 billion collectively to acquire Gatorade, Quaker Oats, and Tropicana.

Pepsi had been dwindling in popularity and, most important, in profits, but the move saw a return great enough to prove Nooyi’s unique judgement and insights were a good horse to bet on. She was promoted to Senior Vice President and Chief Financial Officer, also gaining a seat on the board of directors.

However, ever seeking for ways to do things better and more uniquely, Nooyi wasn’t interested in just making greater profits; in order for Pepsi to truly succeed, it had to follow in Nooyi’s footsteps and continue to evolve and grow.

Under her guidance, PepsiCo created spin-offs such as Pepsi Bottling Group and continued to cut off dead weight including their fledgling restaurants. Looking at the big picture finally saw her named as President, CEO, and Chairman by 2007. With the reins of a company that was only a few years shy of its 50th birthday, Nooyi was able to put her ambitious vision into action.

Taking Pepsi to the Max

Nooyi’s first step was creating a team of managers and advisers made up of the company’s greatest minds, including the former CEO she had replaced. Then she set to taking the PepsiCo problem personally. Nooyi famously toured several stores in her personal time to see how Pepsi products sold out, and when she found that they didn’t, set to revolutionizing their look along with top-name designers.

But the CEO didn’t want to just improve the company; according to a speech made in 2007, she wanted Pepsi to affect the world. “It doesn't mean subtracting from the bottom line,” she stated, “[rather] that we bring together what is good for business with what is good for the world”.

Nooyi developed a growth strategy that would make Pepsi personal to its audience, and make the audience personal to Pepsi. Performance with Purpose was born, and thus died soda as the focal point of the beverage giant. Instead, the brand adopted healthier options, placing its focus away from fatty snacks and drinks and instead to products that were nutritious. Taking advantage of their acquired brands, they began developing Gatorade with fewer calories and oatmeal with higher fiber, making juice more prominent in their brand than soft drinks.

In 2010, Nooyi stated that the company would fight obesity, encourage wind and solar power, and make health a key pillar in their products, effectively remodeling the face of the brand into something more influential for the future.

In doing so, Nooyi transformed PepsiCo, which currently rakes in as much as much as $39 billion annually, employs as many as 198,000 people across the world, spans over 200 countries, and owns over 18 brands that each earn as much as $1 billion annually. Less than 25% of the company’s world-wide sales now come from soda, with more than 25% coming from water and fruit juices.

However, Nooyi still isn’t satisfied. She credits each of her past accomplishments as stepping stones that led her to her current success, expecting the achievements she’s earned now to help her go forward in the future. According to a recent interview, she says, “After PepsiCo, I do want to go to Washington”. Watch out Trump!