US Climate Change policy is expected to suffer severely under Donald Trump.

Now that President Trump is changing the nation's course on climate change, Expert Market has uncovered the true cost to the US economy if the government fails to support future initiatives to combat climate change.

The report cross-referenced U.S. GDP growth projections with cost projections for more severe droughts, hurricanes and flooding caused by prolonged periods of excessively high temperatures to determine how much each state would need to pay to foot the bill if the government takes a ‘business-as-usual’ approach to climate change. 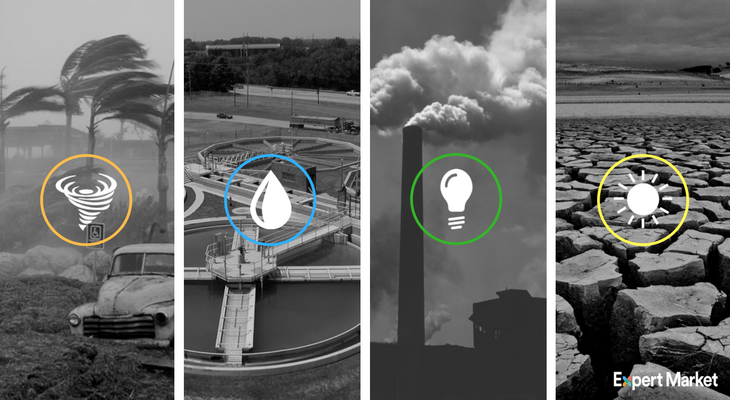 The research suggests that the price tag for the US to deal with the fallout from these climate change induced disasters could be as much as $506 billion by 2050 if future administrations do not act to curb the threat, at least 100 times more than the projected GDPs of 28 states across the country.

However, the report also shows that there is little states can do on an individual scale, instead, green initiatives need to be nationwide in order to have an impact. Vermont, often dubbed America’s ‘greenest’ state due to its impressive commitment to environmental and agricultural initiatives, emerged as the most financially vulnerable state due to its extreme vulnerability to severe weather conditions and comparatively small economy.

Table 1. The U.S. States Most at Risk if Climate Change Continues Unchecked by Government Policy

Climate change denial at a state level could cost Vermont 970 times its projected GDP in 2050 due to it being extremely vulnerable to extreme weather conditions caused by rising air temperatures.

Maine and Rhode Island – both blue states – are also poorly positioned to deal with the cost of combating global warming if a business-as-usual approach is taken, with the global warming price tag amounting to more than 500 times their respective projected GDPs.

California emerged as the state best financially equipped to deal with the crippling cost of global warming, where the bill accounts for only 12% of its overall GDP followed closely by Texas (18%) and New York (20%) who all boast significantly higher GDPs than their neighboring states.

With Donald Trump vowing to dismantle the Paris agreement in which 200 countries agreed to seriously tackle the worst effects of climate change – these projections could fast become a reality.