The States With the Best Economic Growth

Where Should Millennials Live for the Most Successful 2018?

In the late 2000s a great recession hit the American economy and all 50 states were affected. Unemployment rocketed, GDP crashed, and successful new businesses became few and far between.

The recession has officially been over since mid-2009, but some states are recovering better than others.

At Expert Market we researched the growth/decline in the 5 years following the end of the recession of 6 key factors;

Using data from the Bureau of Labor Statistics, Bureau of Economic Analysis, the Kauffman Index and property experts Zillow, we ranked each state by the percentage growth or decline in each factor over the years 2010-2015.

Combining these rankings gave us an overall look into which states have bounced back and now offer great opportunities for those looking to start or grow their careers.

Here are the top 10 states that you should consider moving to if you are hoping for a bright and successful future; 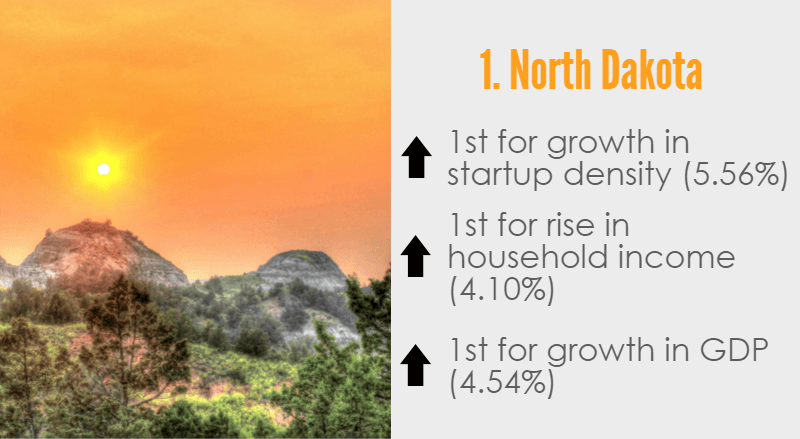 The Peace Garden State on the northern border of the United States and Canada has been anything but sleepy in the years since the recession. A huge surge in oil extraction has seen their GDP rise by 4.54% per capita – far more than any other state. New business density and household income have also both risen here more than anywhere else. Unemployment has decreased but at a slower pace than many other states at only 7.72% – 8th lowest across the country. 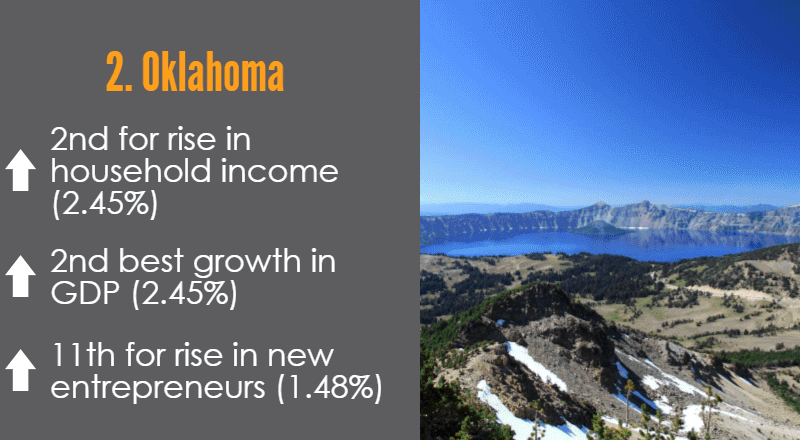 Another state with huge growth in GDP and household income, Oklahoma scored in the top half for every single category. Lower scores for startup density and house values stopped them from grabbing the top spot – despite scoring 17 places higher than North Dakota for a 10.22% decrease in unemployment. 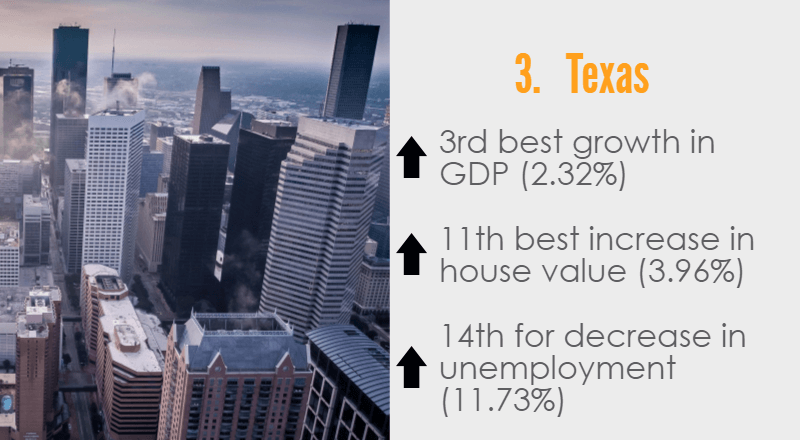 A 2.32% rise in GDP and 3.96% house value increase over 5 years secures Texas a place in the top 3. Housing a tech hub like Austin means it's no surprise that the biggest state scored well for reducing unemployment too, an 11.73% drop put them in 14th place. 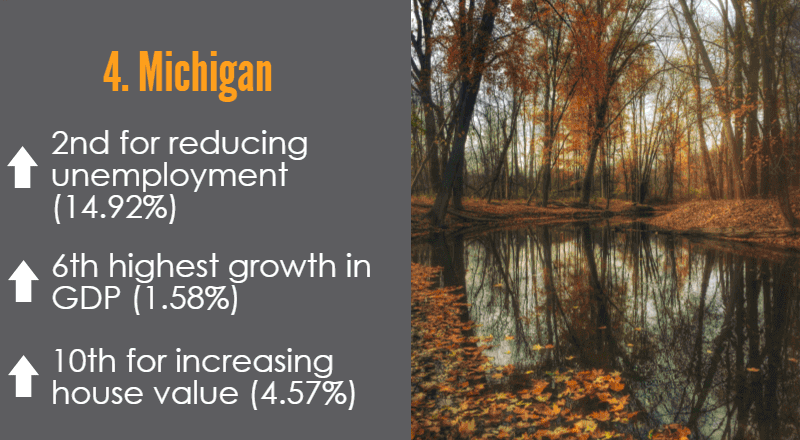 It's not all lying around on boats in Michigan! In fact, the Great Lakes State has been working hard since the recession, reducing unemployment by an impressive 14.92% – second highest of any state, just behind Utah’s incredible 15.12% drop. Whist it has risen by 1.34%, household income has not been growing as quickly in Michigan as most other states, they ranked 5th worst for this factor. 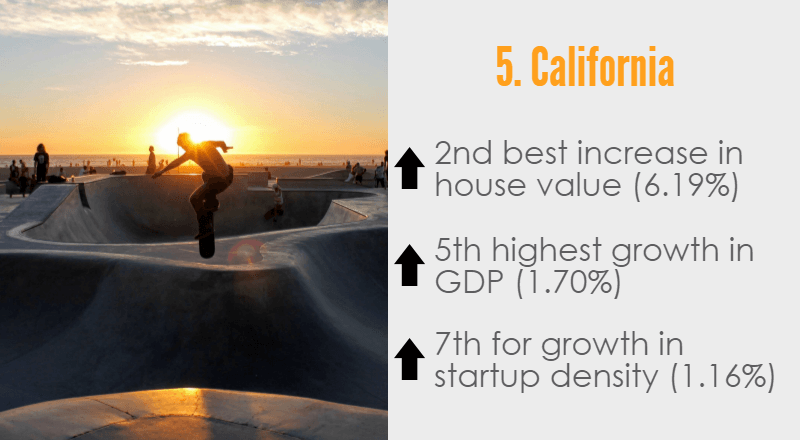 Property prices have always been high in California, but anyone who owns a home there should be very happy with the 6.19% increase in house values over the past 5 years. California has also seen big growth in GDP per capita and startup density, ranking 5th and 7th respectively, perhaps in part due to the huge amount of new companies appearing in Silicon Valley every year. 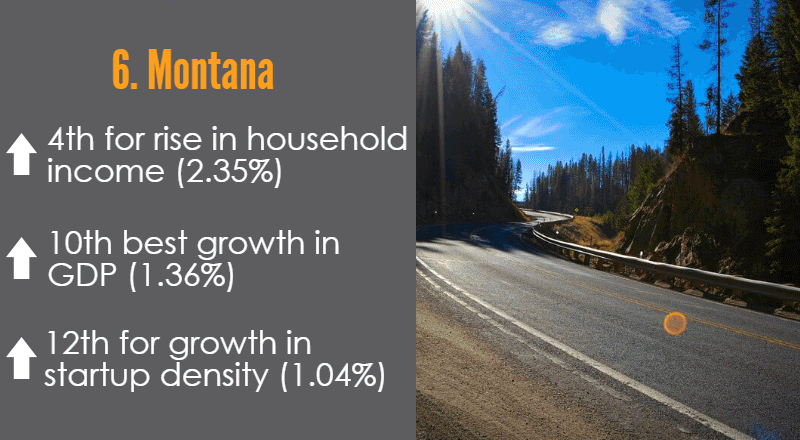 A 4th place score for rise in household income (2.35%), along with average to good scores across the board sees Montana just outside the top 5 but still firmly within the top 10. Having only a small rise in house values (0.95%) let them down and saw them place 32nd for that metric – still better than the 8 states that actually saw a loss in property values over the 5 years. 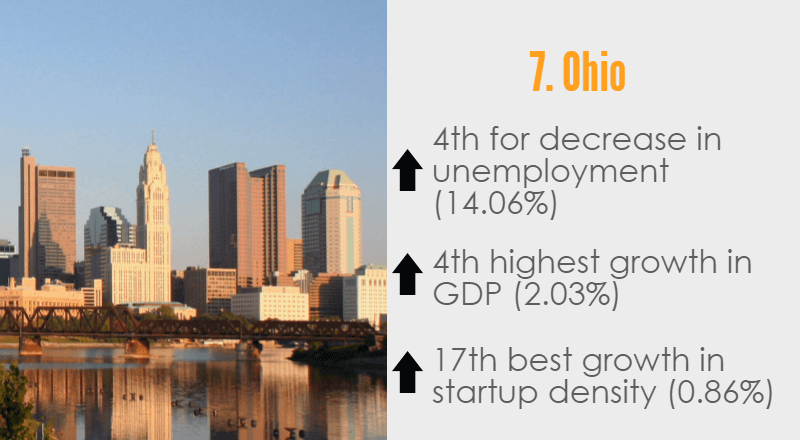 Impressive 4th place rankings for both unemployment decrease (14.06%) and GDP per capita growth (2.03%), combined with average scores for all other factors, brought up the overall ranking of Ohio to 7th place. 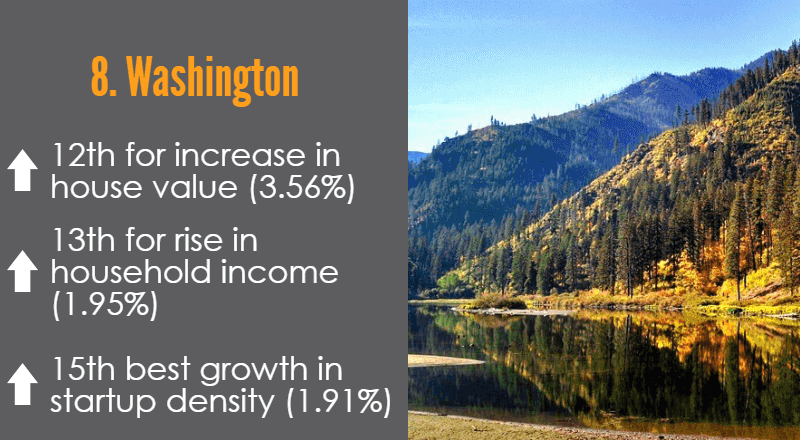 Washington, DC may have the White House, but Washington state in the north western corner of the US has strong economic growth, so who’s the real winner? Scoring within the top half for all factors gave the Evergreen State a place firmly within the top 10. 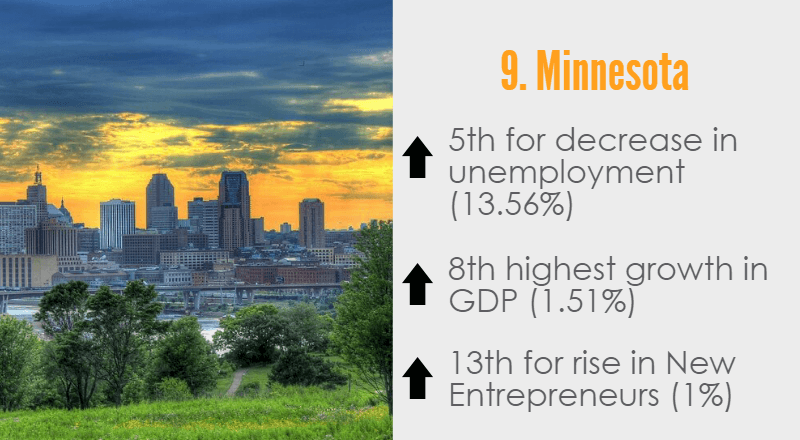 Bordering 1st place North Dakota, Minnesota has had the 5th highest decrease in unemployment (13.56%) since the recession ended. This large northern state also showed an impressive growth in GDP but was let down by their 0.21% loss in startup density, placing them among the 13 states that saw a loss in new business opening rates. 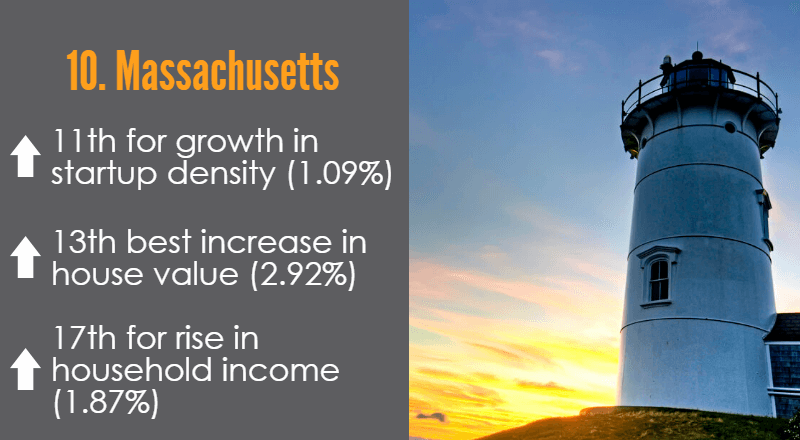 Rounding out our top 10 is the home of MIT. As Boston is one of the top 10 tech hubs to live in, it is no surprise that MA saw a healthy 1.09% rise in startup density, placing them 11th for that category and 10th overall.

New York ranked in the top half of states for a few factors but a very low score for startup density growth sees them starting off our bottom 10. The highest individual rank of any state within the bottom 10 was Arizona’s impressive 5.88% increase in house values which saw them in 4th place for that category. Unfortunately, poor scores across the rest of the board, particularly for household income and rate of new entrepreneurs means they sit firmly within the bottom 10.

However, just because a state ranked in the bottom 10 does not mean that there is no economic growth there. For example, Louisiana ranked in bottom place for reducing unemployment – even though unemployment did drop there by 0.36%. Louisiana actually saw positive growth in 3 out of 6 categories, so if your state is close to the bottom it doesn’t necessarily mean that their economy is dwindling – it may just not be growing quite as fast as in other states.