Which U.S. States Have the Most Green Companies?

Jared Keleher Expert Market US
More from this author
Which U.S. States Have the Most Green Companies?

Despite its on-going battle against drought, California topped the charts when Expert Market researched the locations of the top 500 green companies. California is home to 75 companies, New York came second with 63, and Texas came third with 53.

The findings showed that the South had the highest concentration of green businesses at 148, lead by Texas. Each company was measured by various metrics such as water productivity and green revenue. The further inland you venture, the sparser the green companies are and as a result, most company headquarters appear on both coasts.

13 states had no company headquarters with green initiatives, and with New Hampshire, New Mexico, North Dakota and Mississippi all within that 13, no region was completely guilt-free.

For the purpose of this report, we excluded companies whose efforts are solely geared towards the use of renewable energy, like Solar City or Enercon.

In the infographic above, a number of states have been grayed out. This is because – of the companies listed – there were none with headquarters in those states. The 13 states were: Alaska, Hawaii, Maine, Mississippi, Montana, New Hampshire, New Mexico, North Dakota, South Carolina, South Dakota, Utah, West Virginia and Wyoming.

Not satisfied just by looking at state performance, we also measured the energy efficiency of the companies based on their industry. 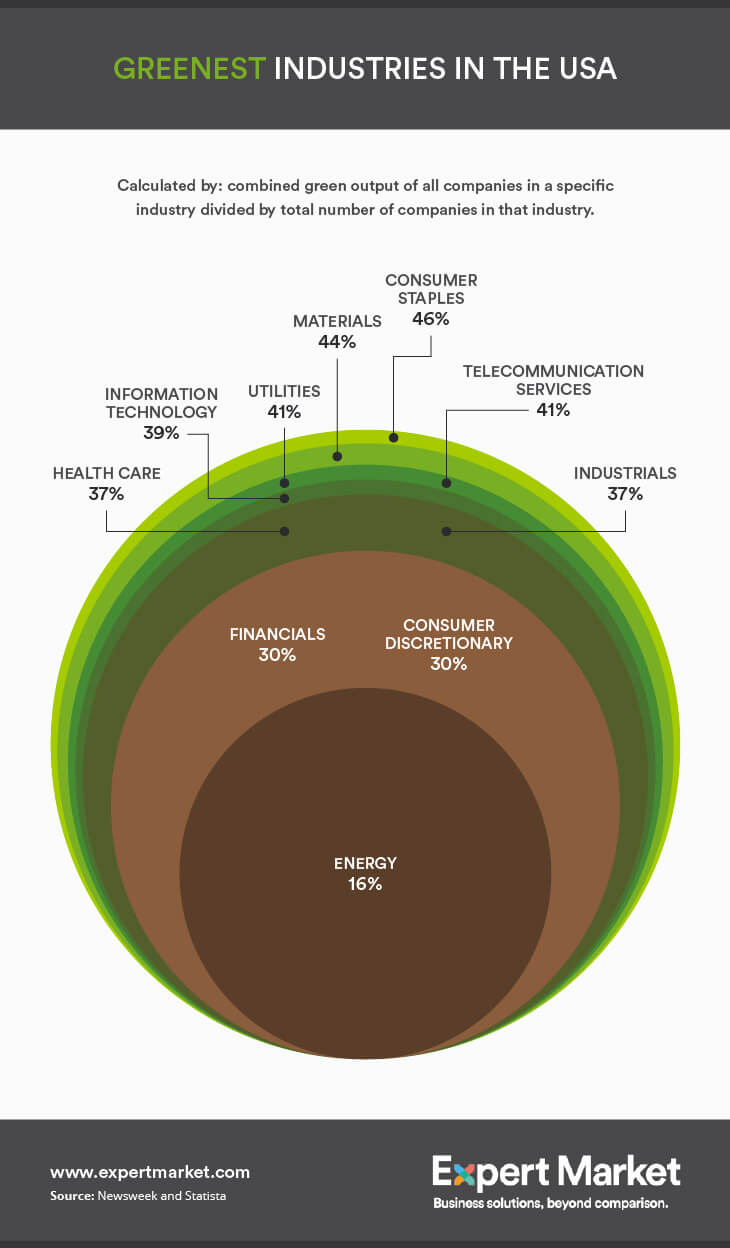 It likely comes as no surprise that the lowest contributor is the energy sector (16%), most obviously because its product is in direct contention with renewable energy efforts. To further clarify this point, however: its ranking is nearly half the percentage of the two industries – financials and consumer discretionary (both at 30%) – that rank closest above it.

The top industry for energy efficiency though, was consumer staples. Being such a public-facing industry means added scrutiny, so extra responsibility is on this industry's companies when it comes to being green and environmentally friendly.

The data also found that there was no correlation between the companies with the biggest wallets and their green ranking. Below is the table featuring the top ten U.S. companies by their 2015 revenue, and their respective positions on our green companies data table:

To further dispel the idea that there’s a positive relationship between revenue and money spent on renewable energy, Wal-Mart, whose 2015 revenue topped the charts at $485.65 billion, came 205th of 500 companies with an overall green percentage of 38.80%.

Furthermore, based on this data, the greenest states in the USA are California, New York and Texas, the best industries are consumer staples and materials, with the South being the greenest region.