There’s a moment in Harry Potter and the Prisoner of Azkaban when Ron Weasley asks Hermione Granger how she’s able to find time for so many extra classes:

We've got six lessons in a day, and they're forty-five minutes long, not counting double classes. But then there are the three other Houses, and if you're somehow going to all of their classes too-”
“It's about eighteen hours a day worth of lessons,” Hermione finally said. “On average. There. Are you happy now?

Hermione’s secret was a Time-Turner, a magical device that reversed time to help her take more classes and get top grades.

We all feel like there aren’t enough hours in the day sometimes. Viewed through the lens of gender pay inequality though, wishful thinking becomes food for thought.

You’ve probably heard the statistic that women, on average, earn 83 cents for every dollar that men make. Averaged out across the 55 years since the 1963 Equal Pay Act became law, that means women would have had to work the equivalent of nine extra years just to draw level with total wages paid to men. Put differently, that’d be like if today’s employers had been making their female employees work for free since the 2008 financial crisis.

Short of magic, there literally aren’t enough hours in the day to get even, let alone get ahead.

Equal Pay Day represents how far into the year women need to work in order to make what men did in the previous year. The gender pay gap persists, but the issue is more complex than women receiving less pay for doing the same work. The Equal Pay Act made direct gender pay discrimination illegal, but more indirect forms of discrimination still pervade society.

For one thing, underrepresentation in several spheres of leadership, from politics to filmmaking, brings women's average earnings down. Women are only 6% of CEOs and make up just a fifth of the House of Representatives in Congress. Just five women have ever been nominated for Best Director at the Oscars. Only one has won.

Occupational differences also tie in. Women are more likely to do low-wage work in part-time roles that offer fewer opportunities for career progression. Of the hundreds of occupations tracked by the Bureau of Labor Statistics, only a handful pay women more than men.

To be fair, some places are making rapid strides towards gender equality. But the overall pace of change might not be fast enough.

We’ve looked at the places hit hardest by the gender pay gap. We used data from the National Women’s Law Center (NWLC) to determine average wages in each US state and pinpoint where the largest gender wage gaps are.

Check out the map and rankings below to see the nation’s worst offenders for yourself. 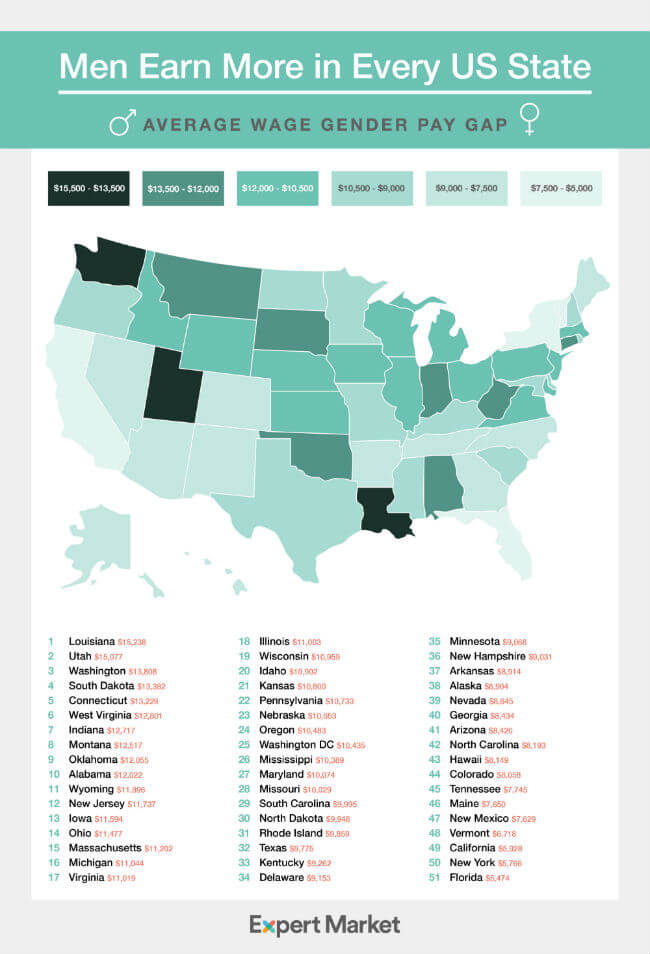 How well does your state do?

Louisiana has the highest gender pay gap, with men earning a staggering $15,238 more than women. Spun differently, women in Louisiana earn 70 cents on the dollar and spend 10.5 hours of each 35 hour work week ‘working for free’. Whichever way you cut it, there’s no way to cast a positive light on the worst gender pay gap in the nation.

New York and California perform well, with relatively small gaps of $5,766 and $5,928 between men and women’s earnings. In recent years, both states banned employers from asking job applicants about their previous salaries. The idea behind the initiatives was to stamp out discriminatory practices that allow employers to underpay women based on low salaries in their last jobs. Looks like it’s paying off.

But it’s actually Florida, placed last in our worst-to-best rankings, that has the lowest gender wage gap. At $5,474, the pay gap in the sunshine state is slimmer than anywhere else. Fun fact: Miami, Florida, is the only major American city founded by a woman.

Please share your thoughts and own business experiences with us in the comments below.