Global Positioning Specialists have conducted a study into the amount of money people in cities all over the world could be losing sitting in traffic on their morning commute. The study looked at 108 cities across the globe and took into account peak congestion, average commute, and average hourly pay in each city.

Mexico City came out as the worst city in terms of percentage of earnings lost to congestion, with a huge 9.7% of their annual earnings wasted sitting in their cars, this equates to $1,045. Those in Mexico city are spending an extra 46.5 minutes per day in their car due to morning congestion, which adds up to 4.9 weeks idling in traffic. Mexico City is followed by Bangkok, Thailand (8.9%) and Recife, Brazil (8.5%).

Surprisingly, only one American city made it into the top 20; unsurprisingly, it was Los Angeles. The city of angels is known for its less than angelic traffic, which is seeing workers lose out on 5.6% of their annual earnings – or $2,886. Other American cities involved in the study include New York, Miami, Nashville and San Francisco. See the table below for each city’s congestion and how much it is costing their inhabitants. 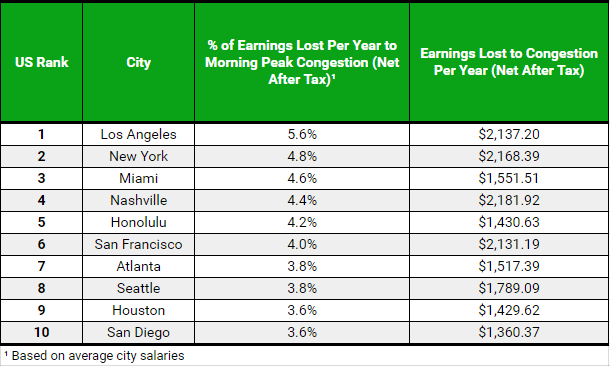 The Rest of the World

Central and Southern American cities took up multiple positions in the top 20, Brazil being the worst offender with 4 cities – Recife, Rio de Janeiro, Salvador, and Fortaleza. Moscow is the worst city in Europe for congestion, with workers there losing out on 8.3%of their earnings or $1,087. Check out the 20 cities where workers lose out the most to morning congestion here; 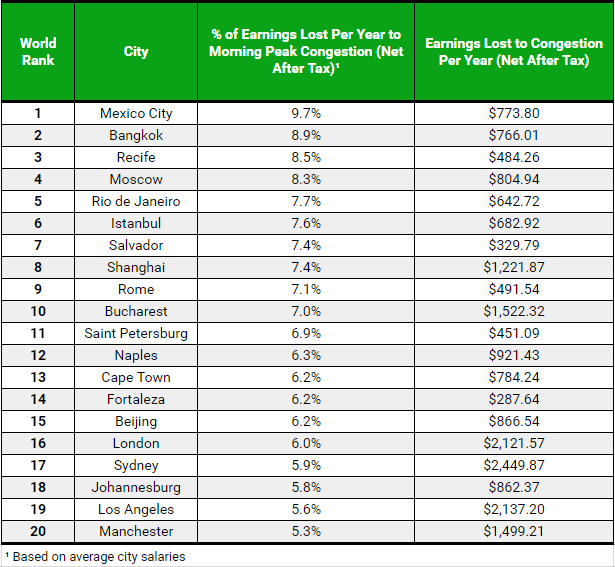