In the modern age of business and technology, buzzwords like “crowdfunding” and “content distribution” have clear-cut definitions. So when a new startup like Crowdshare emerges, you may be forgiven for initially thinking (based on the name) that you already know what this business does. Think again.

We spoke to crowdshare founder Daniel Gigante to understand the true nature of his company.

“Crowdshare is an open community where users can share their digital creations and receive feedback, tips and donations” Daniel informed us. Such a format may, on the surface feel familiar but the depth of this startup comes from the underlying passion for art and creation. So what makes this company different?

“Up-front, we’re totally free and completely open. There’s no freemium, pay-per-download, recurring donations etc.” Daniel explained. “We also have very few limitations on what people can share, as well as what categories are created.” 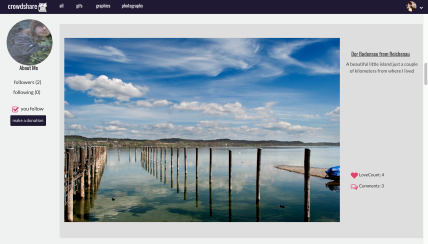 However, as Daniel emphasized, “More importantly, we are trying to drastically change the way people distribute, consume and think about creative content.” It’s here the crucial difference is clear; “Crowdshare is not something that people ask their Facebook friends to check out, and possibly make a donation towards. We’re making something you, as an artist or fan, can use to discover new creative content and voluntarily support work you love”.

Where Did the Idea for Crowdshare Originally Come From?

“Crowdshare is still fairly young” Daniel informed us, the company was officially created in November 2014, but where did the idea originate?

“To get philosophical – crowdshare was built on a firm belief that creative content should be shared with as many people as possible. We believe there should be very little, if any, barriers to consumption. We understand different peoples – their cultures, backgrounds, approaches to critical thought – often times, through music film and text.”

“The more people who have access to diverse creative work today, the more tolerant, peaceful and loving we are tomorrow.”  Daniel explained.

Looking back slightly further than the start of crowdshare, Daniel told us about the project which came first and paved the way for his new startup. “Crowdshare was born out of a smaller project called StudyHawk.”

Despite this company never fully coming to fruition, the general idea was to allow students to share class notes and to have discussions anonymously in order to fuel new thoughts and creativity. “This vision of what StudyHawk could be, in many ways, was very similar to what Crowdshare is today.”

What Does a Typical Day Look Like for You?

“Hmm…this is tough to answer because I don’t really have a typical day” Daniel revealed. “On any given day I might be writing a blog post, code, designing, sending mass amounts of emails – some days I do all of those things.”

Based on this and on the other startups we’ve spoken to, clearly this is something to expect as the founder of a new startup company. We’ve also frequently seen that dedication often comes in the form of working hours and Daniel is no different. “I normally wake up around 9am, eat breakfast and take a shower. I start working at 10am and normally call it quits around 3am.”

What Struggles Have You Faced That Other Young Companies Should Watch out For?

“I guess the biggest struggle has been dealing with unpredictable issues. It’s very hard to see, without active users, what will become a future issue. I guess the best advice I can give is to be prepared for constant issues and necessary changes. “

Who's Your Biggest Entrepreneurial Inspiration?

“There are a lot of people I find inspiring, although above everyone else, I’d have to say Elon Musk. It’s not just his genius (although it could be) but it’s also his poise and business acumen.”

Having discovered who Daniel admires, we wanted to know what he thought the best part about having his own business can be. Daniel’s answer was a simple one, “being able to work on something you love and seeing your ideas become reality.”

So what’s next for crowdshare? Updates it seems! “We’re releasing a new version of crowdshare in 7-10 days. It’s built with mean.io and will drastically improve user experience.”

What’s certain is that the message here is clear; artists create art for love of art, not love of Facebook likes. So this true appreciation of art and creativity is what will drive the feedback, comments and inevitable donations that a platform like crowdshare facilitates.