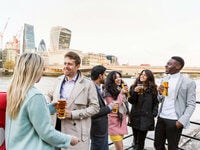 We power the world’s most productive economy, but are US workers some of the weariest? A fifth of private employers still don’t offer their employees paid vacation time, and we’re the only developed nation with no legal entitlement to it.

And, while wage growth is flat, we’re apparently busier than ever. 62% of American office workers now say they usually eat their lunch in the same spot they work all day. If that sounds like you, do yourself a favor and don’t read the next part (especially if you’re eating) – scoffing down lunch at your desk can expose you to more bad bacteria than a toilet seat.

There has to be a better way for millennial workers to make a living. Aren’t the French known for taking long lunch breaks and lots of time off? Could moving abroad be the key to earning more while working less?

Inspired by this hunch (and a generous helping of population and wage data, courtesy of Deutsche Bank and UBS), we researched the cities that offer young workers great pay, amazing hours and ample annual leave.

You might be surprised by who came out on top!

Luxembourg to London: The Top Ten

Nestled snugly between Belgium, Germany, and France, land-locked Luxembourg's workers are in jobs as cushy as its country's location. With big salaries and and almost five weeks of paid vacation, Luxembourgers have it good.

Capital cities are known for being for hubs of industry, and our data suggests there's little to buck that trend. With the capitals of Germany, France, Finland, Denmark, Italy, Ireland, Norway, and the UK all well-represented in our list, it's no surprise that it's where our best talent is always headed.

It's also worth pointing out that Europe overall did well in our list – not a single city from outside the continent got a sniff.

Beijing to Bangkok: The Bottom Ten

Actually, our data suggests that the worst country for working less and earning more is Indonesia – specifically its capital, Jakarta.

Indonesia's core hub of industry ranks bottom overall, and fourth from bottom for salary, with an average monthly wage of just $548. 12 days paid vacation isn’t the worst by any stretch – that distinction goes to the three days paid leave in Sao Paolo – but it’s not outstanding.

Young adults across Asia have little to be happy about in general, with five of the bottom ten cities ranking poorly for pay, holiday time and hours worked.

Oh, and we hate to break it to you heliophiles, but the culture-rich, sun-soaked cities of Latin America aren't exactly places to go if you want lots of money… or long vacations. Cities from Colombia, Chile, Mexico, and Argentina are all to be found in the lower echelons of our list – although the mid-table statuses of Brazil's Rio de Janeiro and Peru's Lima do something to buck the trend.

But hey, at least the empanadas are amazing!

We don't feature in the top ten or the bottom ten… so just how did US cities fare when it comes to that holy grail of work-life balance?

Unsurprisingly, the Big Apple is the country's top contender, ranking at 13th overall with a whopping average salary of $4,304 – the third largest on the list, after Swiss powerhouses Zurich and Geneva.

Miami and Los Angeles jostle for similar mid-table rankings, while Chicago is the lowest ranking American city, at place 41.

Canadian cities probably deserve some credit here, too – Montreal (33) and Toronto (44) both hold their own with modest working hour quotas, and decent pay.

Check out the full list of cities below to see if yours made the cut. And the next time you find yourself in the office at 9pm with a lap full of spreadsheets and sandwich crumbs, remember that you can always ditch the rat race…

…and buy a one way ticket to Luxembourg!

As always, thanks for reading!

And, now you've fallen into our intricate rabbit hole of fun, city-related content, why not dive even deeper? You can explore the best and worst cities for commuting (the US is certainly well-represented in the latter – we're looking at you, Miami!), as well as the world's top tech cities.